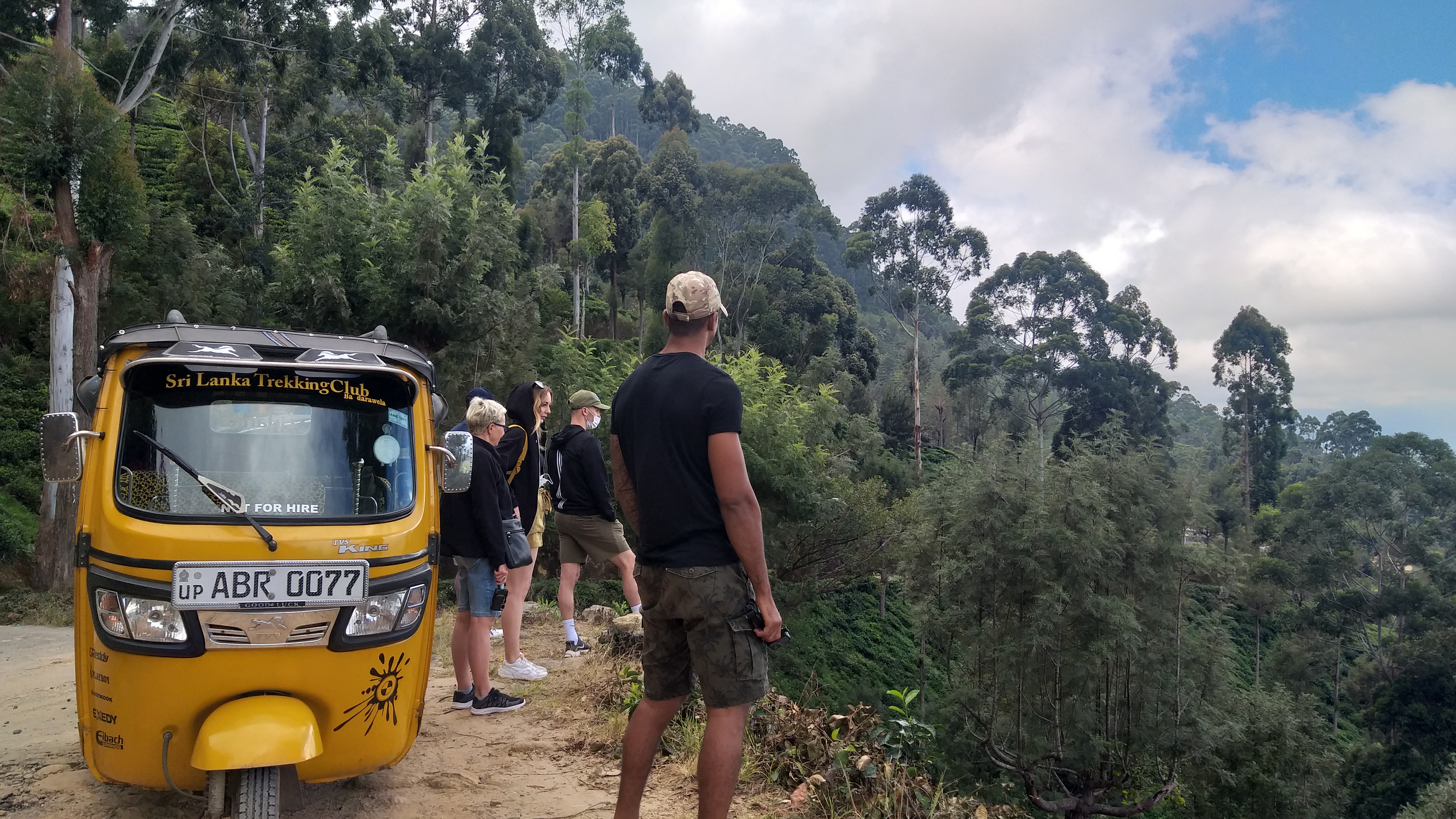 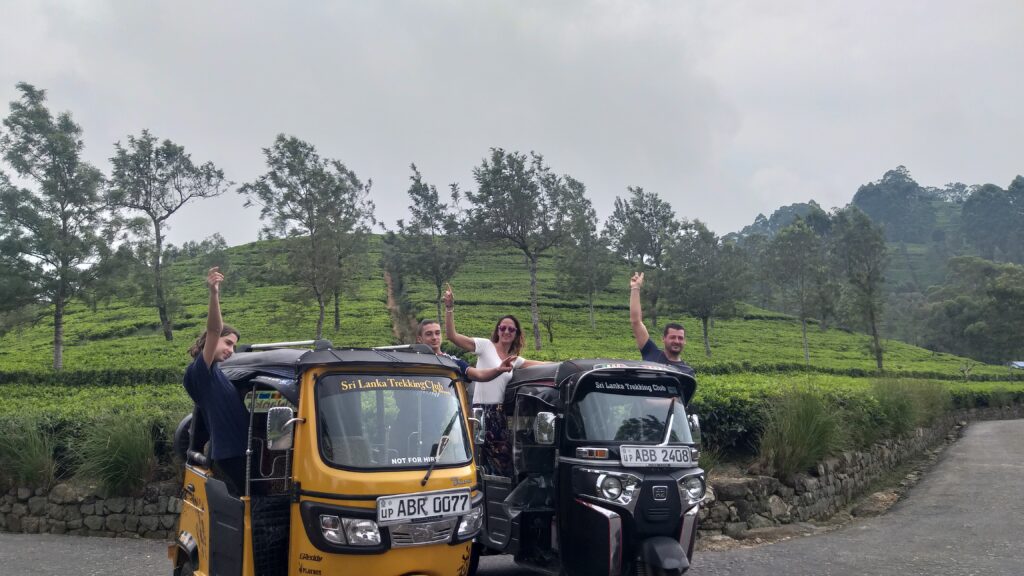 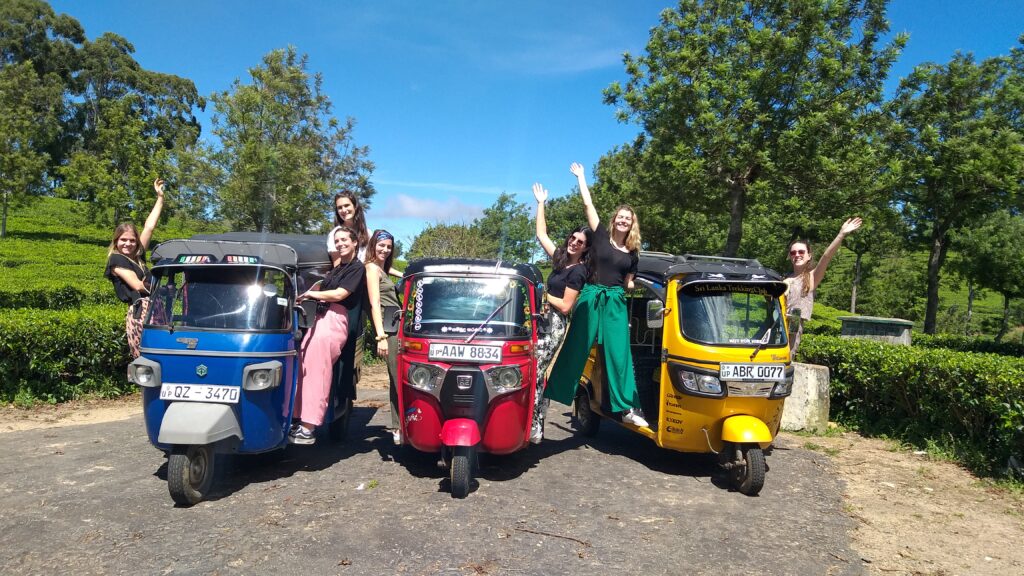 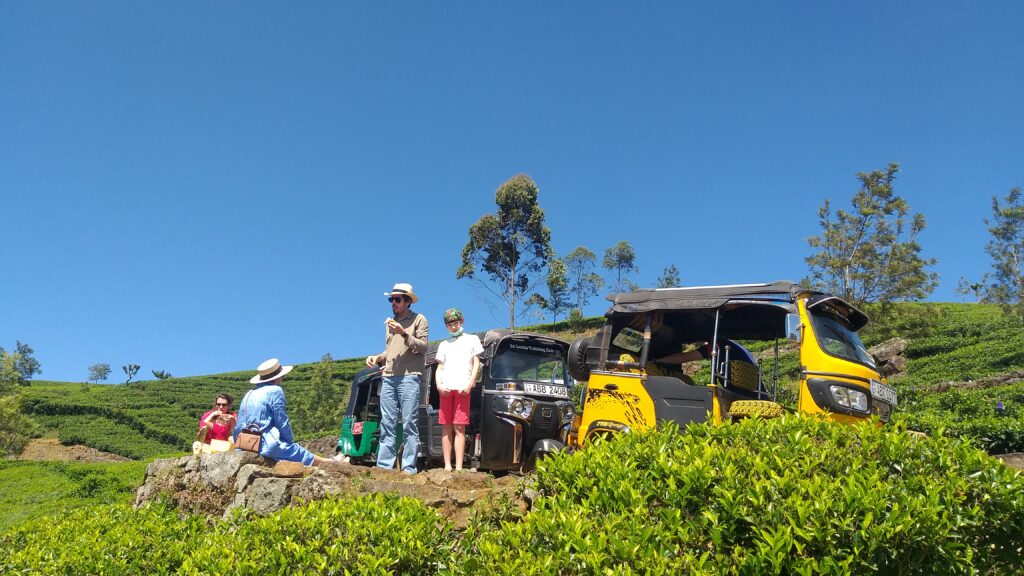 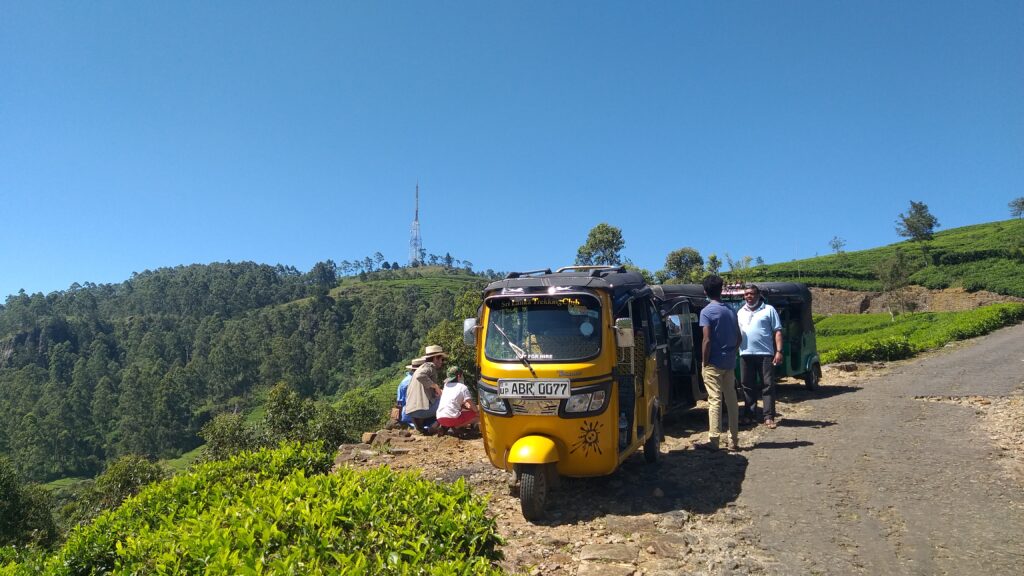 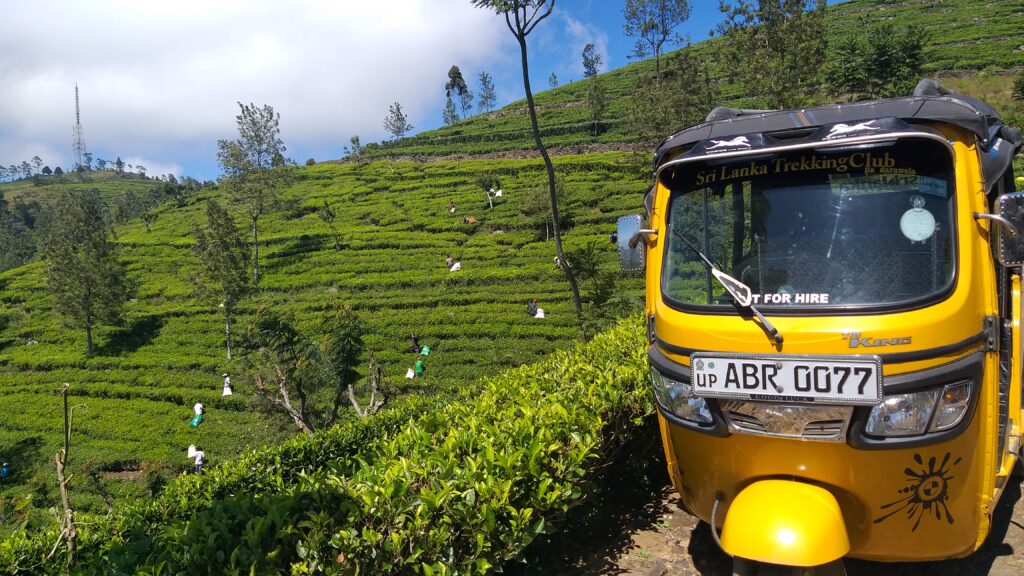 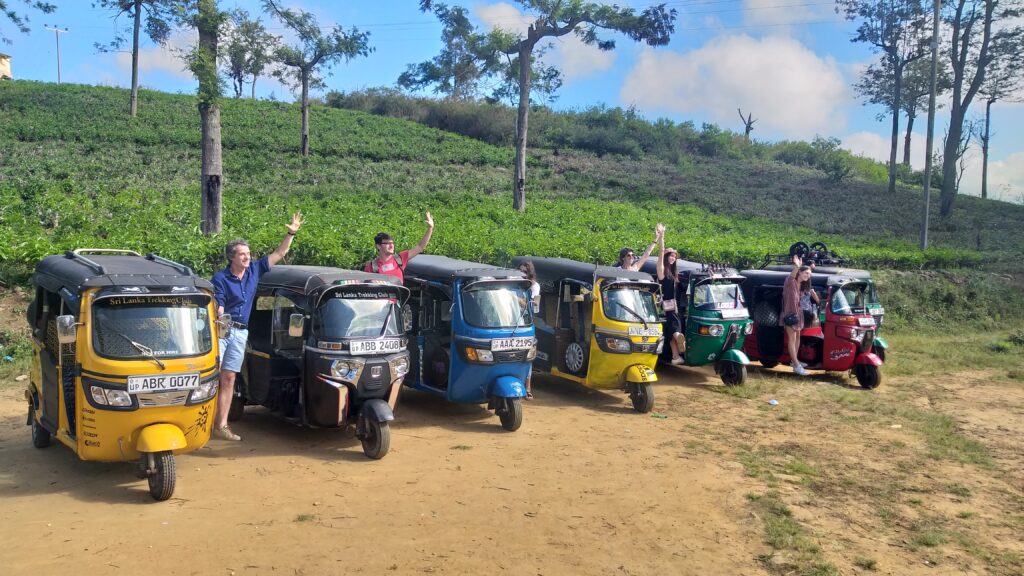 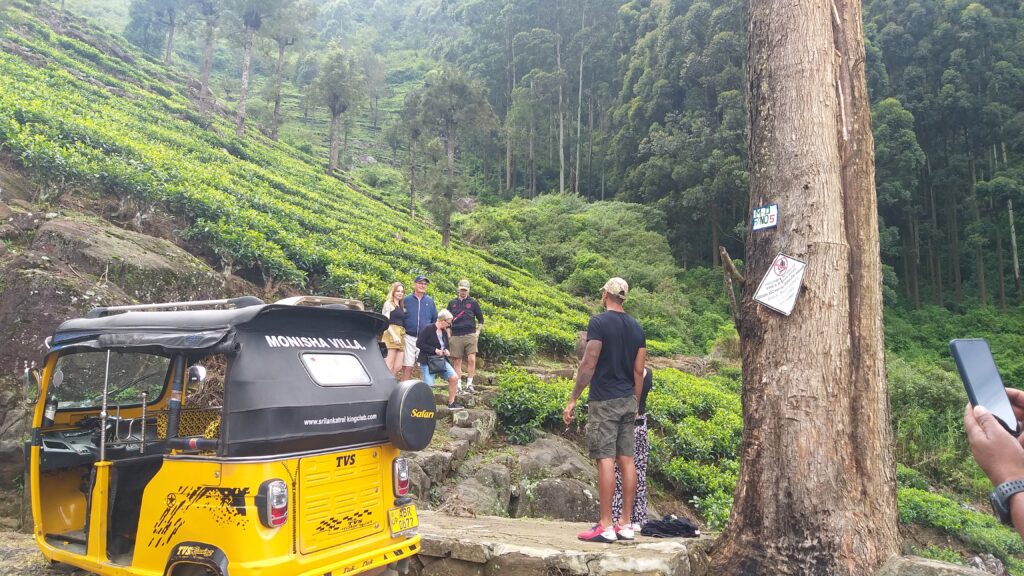 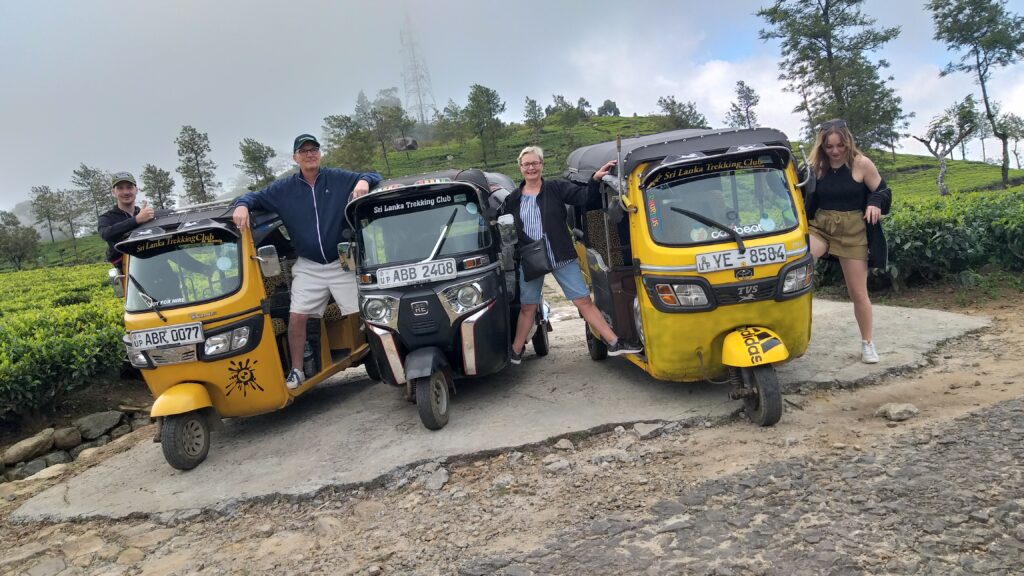 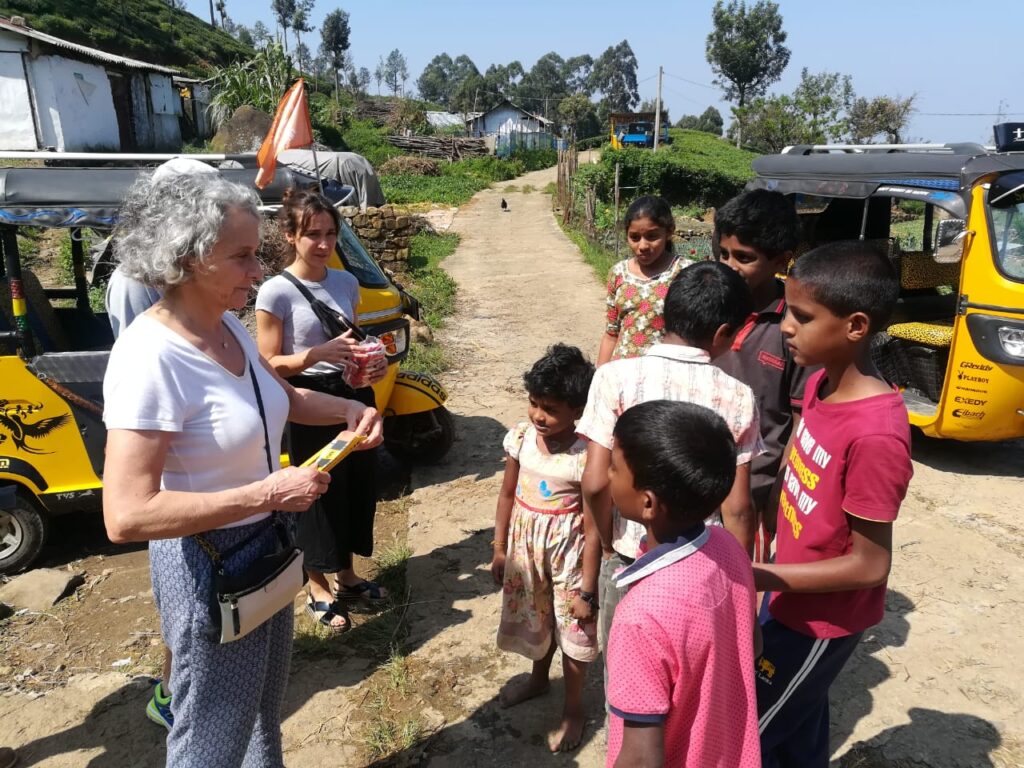 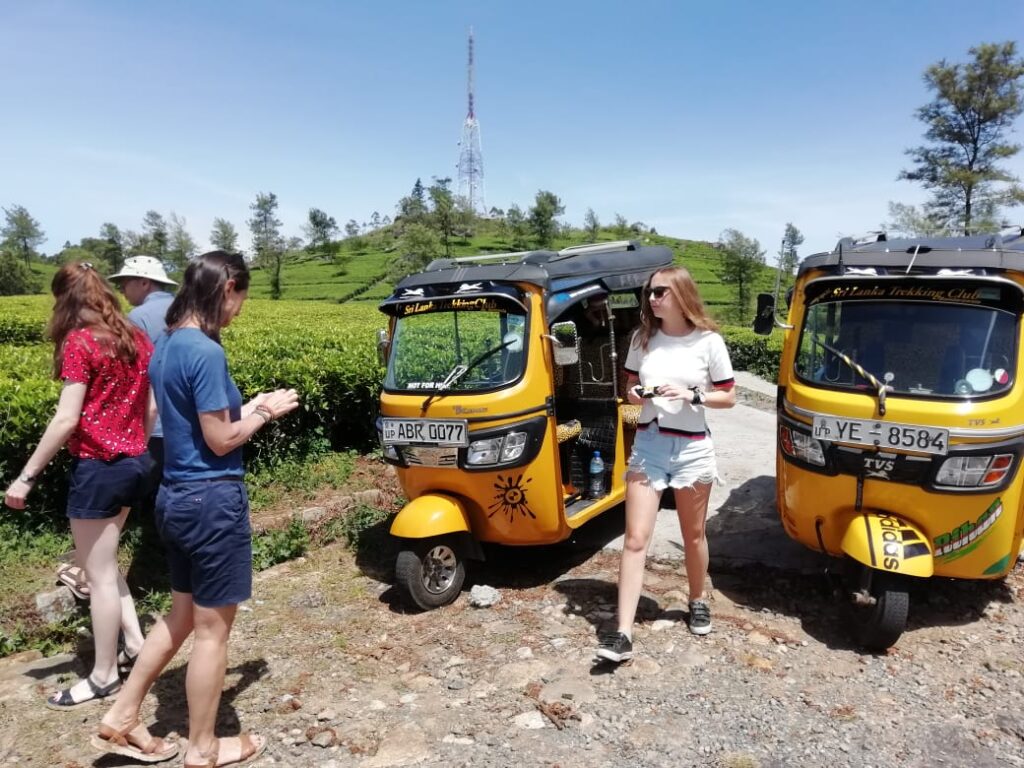 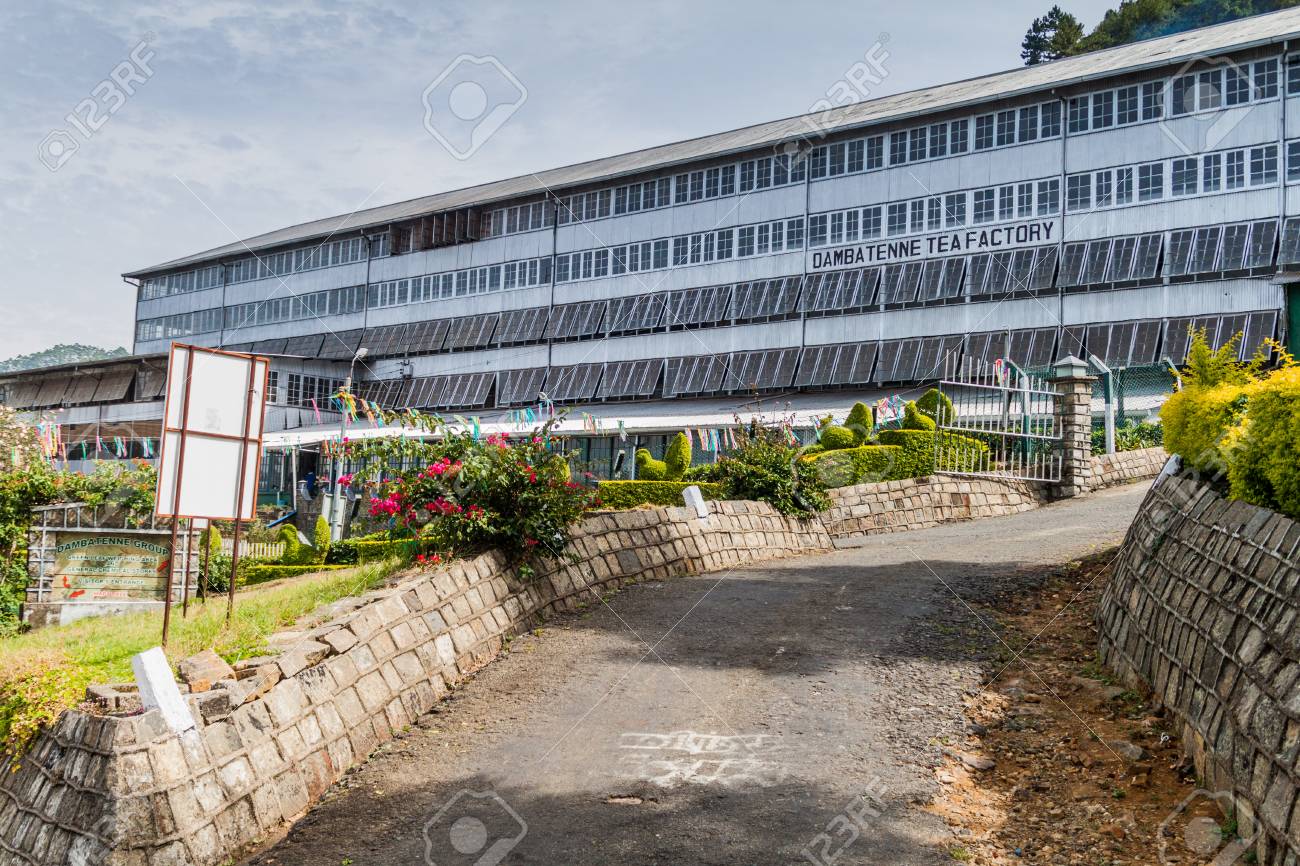 Auto rickshaws, commonly known as three-wheelers or tuk-tuks, can be found on all roads in Sri Lanka from the curvy roads through the hill country to the congested roads of Colombo transporting locals, foreigners, or freight. Sri Lankan tuk-tuks are of the style of the light Phnom Penh type. Most tuk-tuks in Sri Lanka are a slightly modified Indian Bajaj model, imported from India though there are few manufactured locally and increasingly imports from other countries in the region and other brands of three-wheelers such as Piaggio. In 2007 January the Sri Lankan government imposed a ban on all 2-stroke three-wheelers, and therefore the ones imported to the island now are only with a four-stroke engine. Most three-wheelers are available as hiring vehicles, with few being used to haul goods and as private company or advertising vehicles. 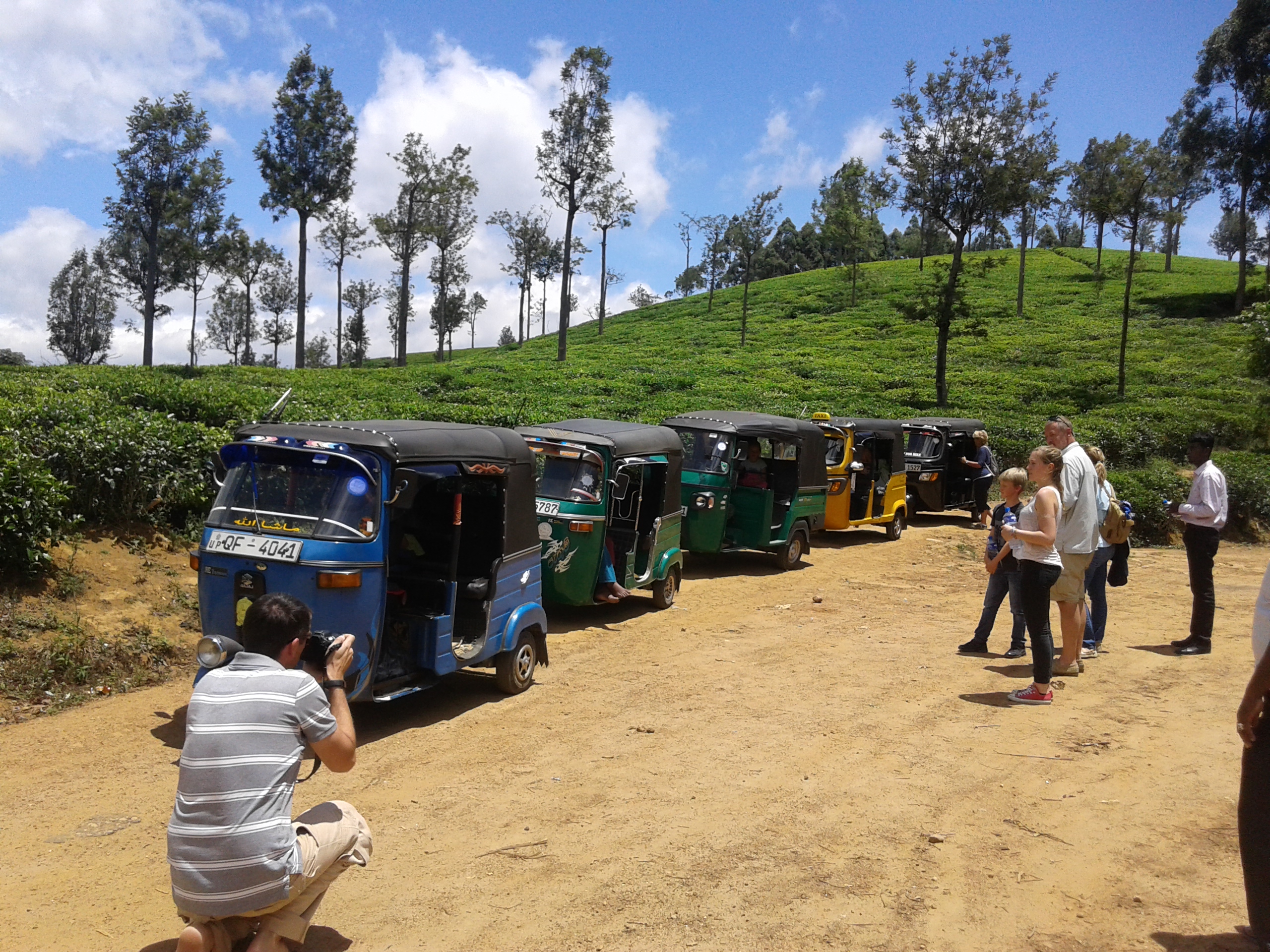 Tea production is one of the main sources of foreign exchange for Sri Lanka (formerly called Ceylon), and accounts for 2% of GDP, contributing over US $1.5 billion in 2013 to the economy of Sri Lanka. It employs, directly or indirectly, over 1 million people, Sri Lanka is the world’s fourth-largest producer of tea. In 1995, it was the world’s leading exporter of tea (rather than producer), with 23% of the total world export,

The humidity, cool temperatures, and rainfall of the country’s central highlands provide a climate that favors the production of high-quality tea. The industry was introduced to the country in 1867 by James Taylor, a British planter who arrived in 1852. Tea planting under smallholder conditions has become popular in the 1970s.

Sri Lanka’s hill Country is carpeted with beautiful terraced tea plantations. Perhaps the most famous is Lipton Tea original plantation near Haputale, which still grows and sells a variety of teas 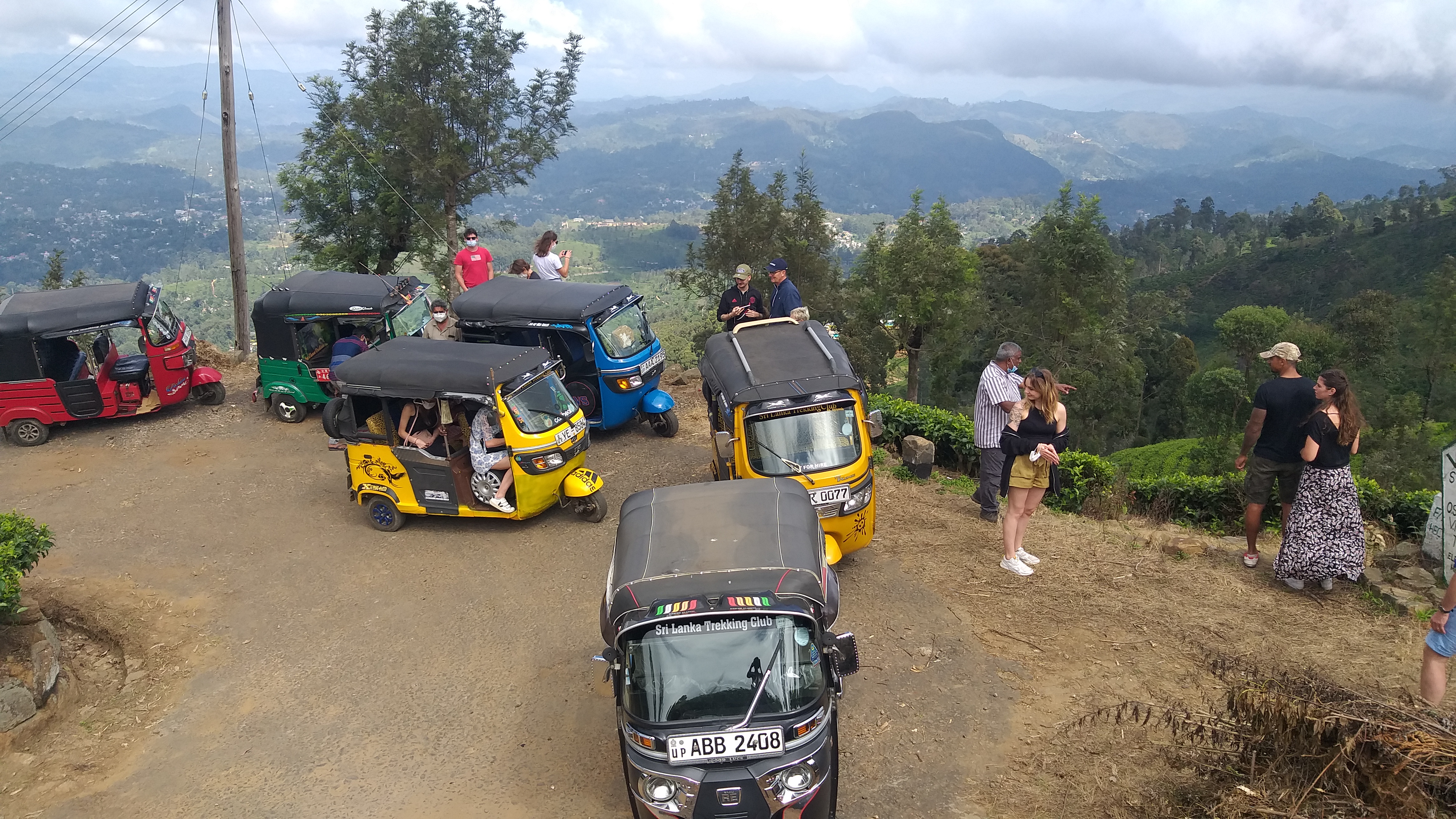 Tuk Tuks. Auto rickshaws, commonly known as Three-wheelers, tuk-tuks or trishaws can be found on all roads in Sri Lanka from the curvy roads in the hill country to the congested roads of Colombo transporting locals, foreigners, or freight about.

A Day out in the Tuk Tuk to the Best Sri Lankan Tea plantation and the nature Don’t miss this ride of a life time! Nothing can compare to blowing in the wind in the country side with a tuk -tuk ride

Tuk Tuk safari to the most beautiful tea plantation & leptons seat Lipton’s Seat is a Most famous view point of Badulla district and popular visiting place closed to Haputale Sri Lanka. Lipton Seat is an observation point and at least 7 districts can be seen in this location. On the way to Lipton Seat there is a popular tea factory called Dambethanna Tea Factory which is largest tea factory of Badulla district.

The Tuk tuk safari we start from Bandarawela and ride true most beautiful tea plantation in Sri Lanka we will meet the tea plucking lady’s and some time we join than to pick some tea and we do some walking in the tea plantation with panoramic views Sri Lanka offers, and also we will visit the tea plantation village, we go to the famous leptons seat Once you are familiar with the tea trees first hand, you can visit the Lipton’s  tea Factory to see how the tea is processed from green leaves to a block cup of Tea also you can buy the fresh tea made in the factory and the tea plantation you visit

After the tea factory we drive via Haputale to Bandarawela to a private home Where you will do the Sri Lankan spicy Rice & Curry Sri Lanka cuisine has been shaped by many historical, cultural, and other factors. Foreign traders who brought new food items; influences from the cuisine of Southern India have all helped to shape Sri Lankan cuisine. Today, some of the staples of Sri Lankan cuisine are rice, coconut, and spices. The latter are used due to Sri Lanka’s history as a spice producer and trading post over several centuries.

The central feature of Sri Lankan cuisine is boiled or steamed rice, served with a curry of fish, chicken, beef or mutton, along with other curries made with vegetables, lentils, or fruits. Dishes are accompanied by pickled fruits or vegetables, chutneys, and sambols. coconut sambol is especially common, a paste of ground coconut mixed with chili peppers, dried Maldive fish, and lime juice.

and coconut milk you will experience how to Grate or Scrape coconut and take the fresh milk, You will do all the preparation and the cooking guide by Fathima who is famous for cooking class you can see in the trip adviser Sri Lanka Trekking Club once the cooking is finish you will enjoy the late lunch and after the lunch, we will drop you in your hotel in Ella or Haputale 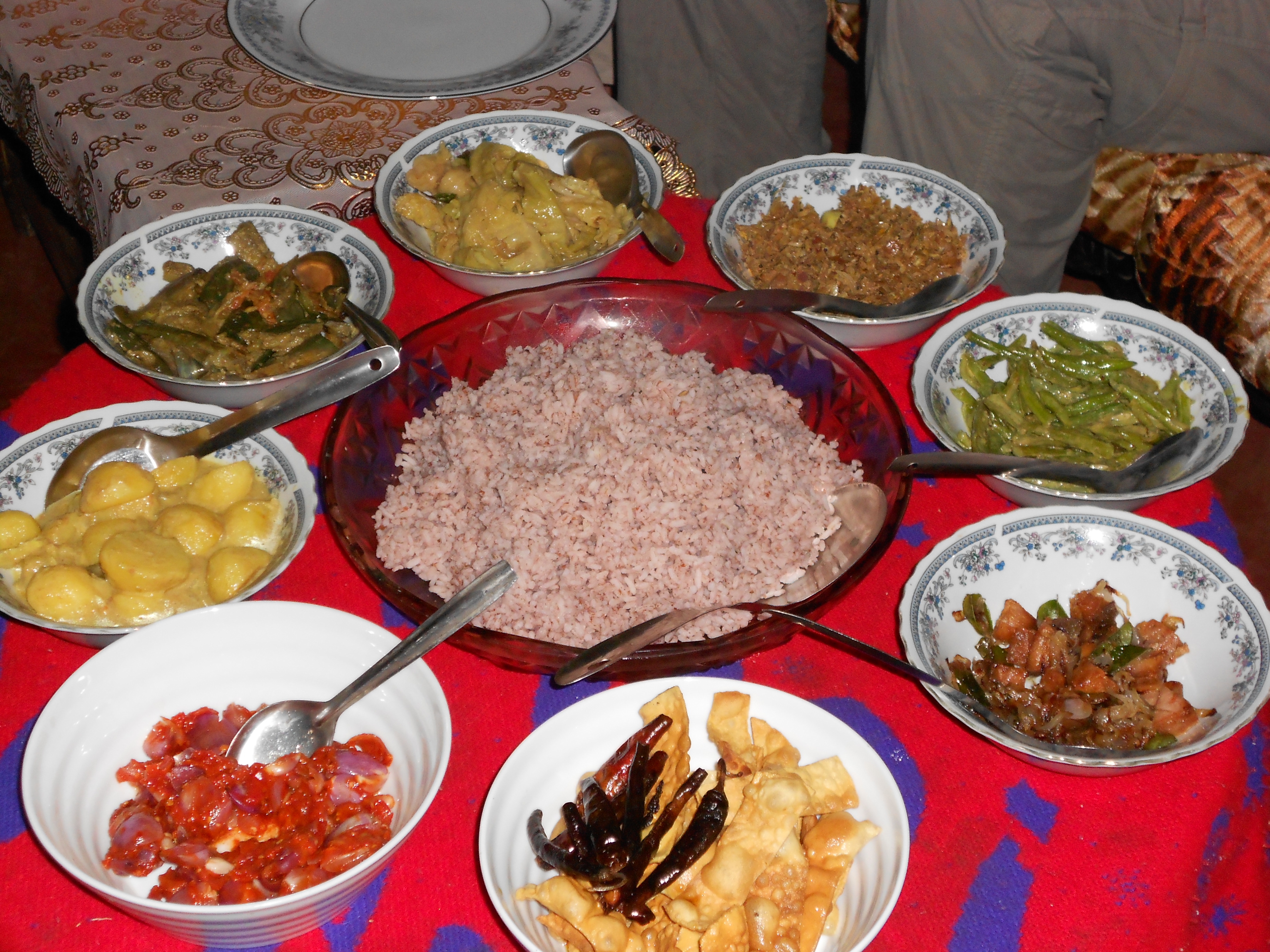 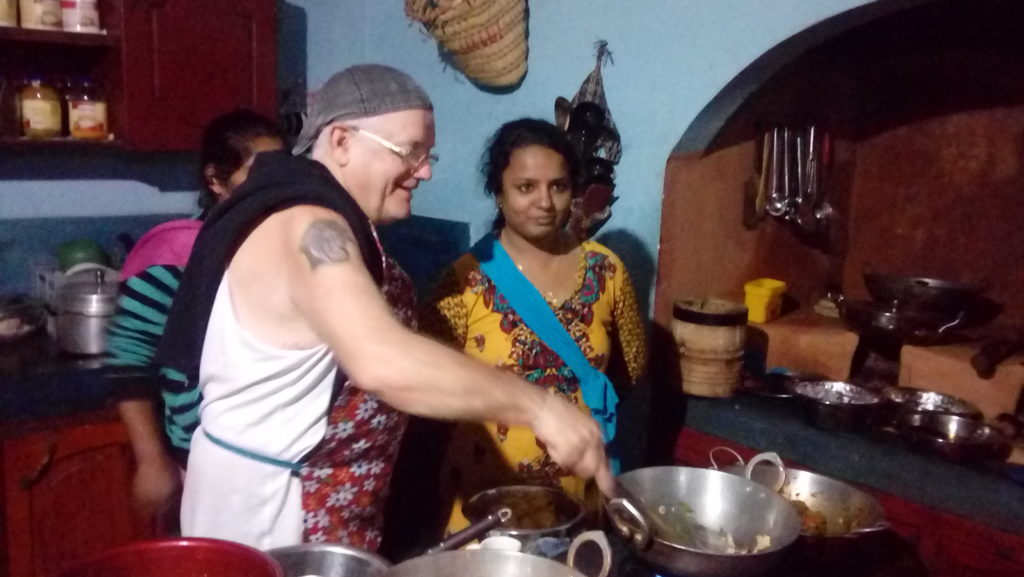 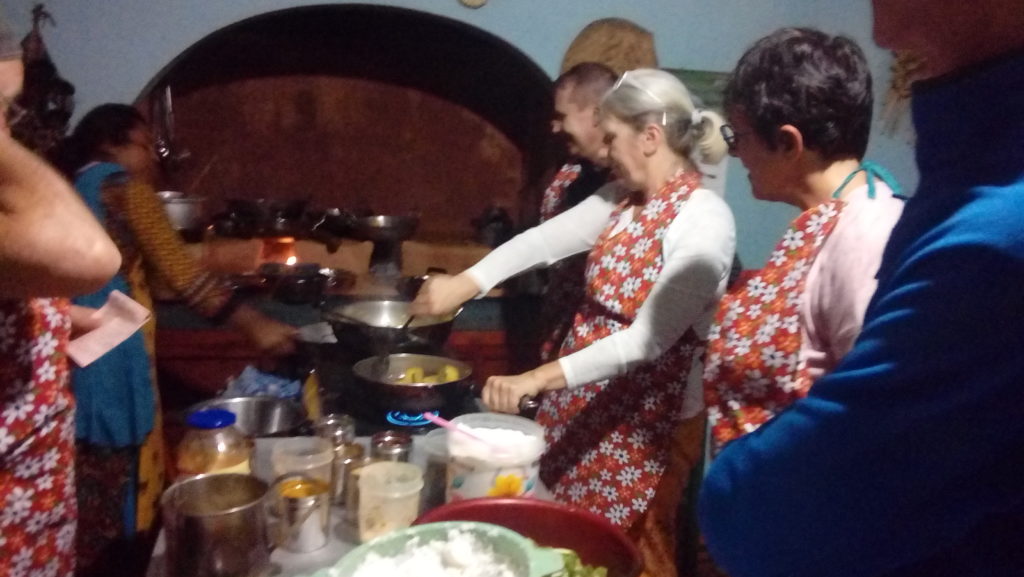 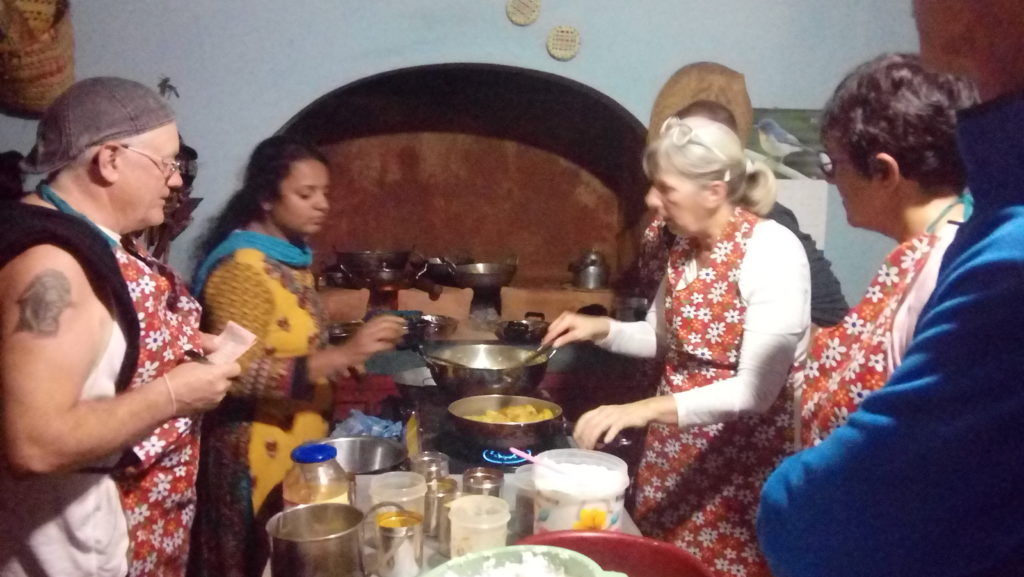 A Day out in the Tuk Tuk to the Best Sri Lankan Tea plantation and Waterfall the nature views  Don’t miss this ride of a life time! Nothing can compare to blowing in the wind in the country side with a tuk -tuk ride

Tuk Tuk safari to the most beautiful tea plantation, The Poonagala Hills are a range of low lying hills in the Central Highlands of Sri Lanka. Whilst quite beautiful by themselves, with rolling green fields of tea, the area gains its fame due to four very specific viewpoints known for the amazing views of the island. These viewpoints Pilkington Point, Millennium Point, Lipton’s Seat, and St. Catherine’s Seat; became known globally as popular sightseeing locations during the era of the British tea planters and we visit the Pilkington Point, Millennium Point

Pilkington Point gained its name in 1898 from Sir George Pilkington, the first manager Poonagala Group, who used this location to scan the vast tea estate of Poonagala in late 1800’s. The viewpoint lies 1400m above sea level in the Haputale ,The vista gives an unprecedented view all the way to the Southern Coast. The districts of Monaragala, Hambanthota, Rathnapura and a part of Ampara are visible. Some of the more identifiable landmarks include Wellawaya, the Kiri Vehera Temple of Kataragama, Embilipitiya and Udawalawe.

Diyaluma Falls is 220 m (720 ft) high and the second highest waterfall in Sri Lanka and 361st highest waterfall in the world. It is situated in Koslanda, The Falls are formed by Punagala Oya, Diyaluma Falls is one of the most beautiful waterfalls in Sri Lanka, not just for its height and the rapid flow of water but also because of its surroundings – breathtaking scenery and natural landscape, The Falls consist of two separate waterfalls; the Upper Diyaluma which is comparatively smaller and the Lower Diyaluma with its vertical drop

There are many cool pools found at the top of the falls that vary in size and depth, some of which you can reach by trails around the falls. So why stay in the main pool when you can go hopping from one pool to another, this should make your day more fun and exciting.

The rubber tree, Hevea Brasiliensis, originally comes from the rain forests of Brazil and South America. Rubber had been used for generations by indigenous Amazon tribes. It has been discovered that the Ancient Mesoamericans had a ball game using rubber balls and the Mayans also made a type of temporary rubber shoe by dipping their feet into a latex mixture. But it was not until 1839, when Charles Goodyear accidentally dropped rubber and Sulphur on a hot stovetop causing it to char like leather yet remain plastic and elastic, that the first industrial application for rubber was discovered. Vulcanization is a refined version of this process.

While Sri Lanka is not among the biggest cocoa producers of the world, Central, North Western, Sabaragamuwa, Uva, Western and Southern provinces of the country have good conditions for growing it. Cocoa can be considered the most important tree crop in these areas. Cultivation of cocoa was started in Sri Lanka by the British in 1834.

Pepper, popularly known as the “King of spices” and it accounts for …. occupies largest percentage in the international spice trade. It is most widely used spice all over the world. Black pepper of commerce is the mature dried berries of the woody perennial evergreen climbing vine, Piper nigrum. Pepper is cultivated over an area of 32,800 ha of Sri Lanka, It can be grown either as a mono crop or as a mixed crop in the coconut and tea plantations using live and dead standards as support. Pepper is an ideal crop for home gardens where it can be trained on the existing tree species as well. Sri Lankan black pepper has higher piperine content which conduces to fetch a premium price in international spice trade.

And many more useful trees produce fruits, The tour is a Full day you will have a lunch in a local house or picnic lunch once your tour is end in the evening we will drop you in your Hotel in Ella, Haputale Or Bandarawela 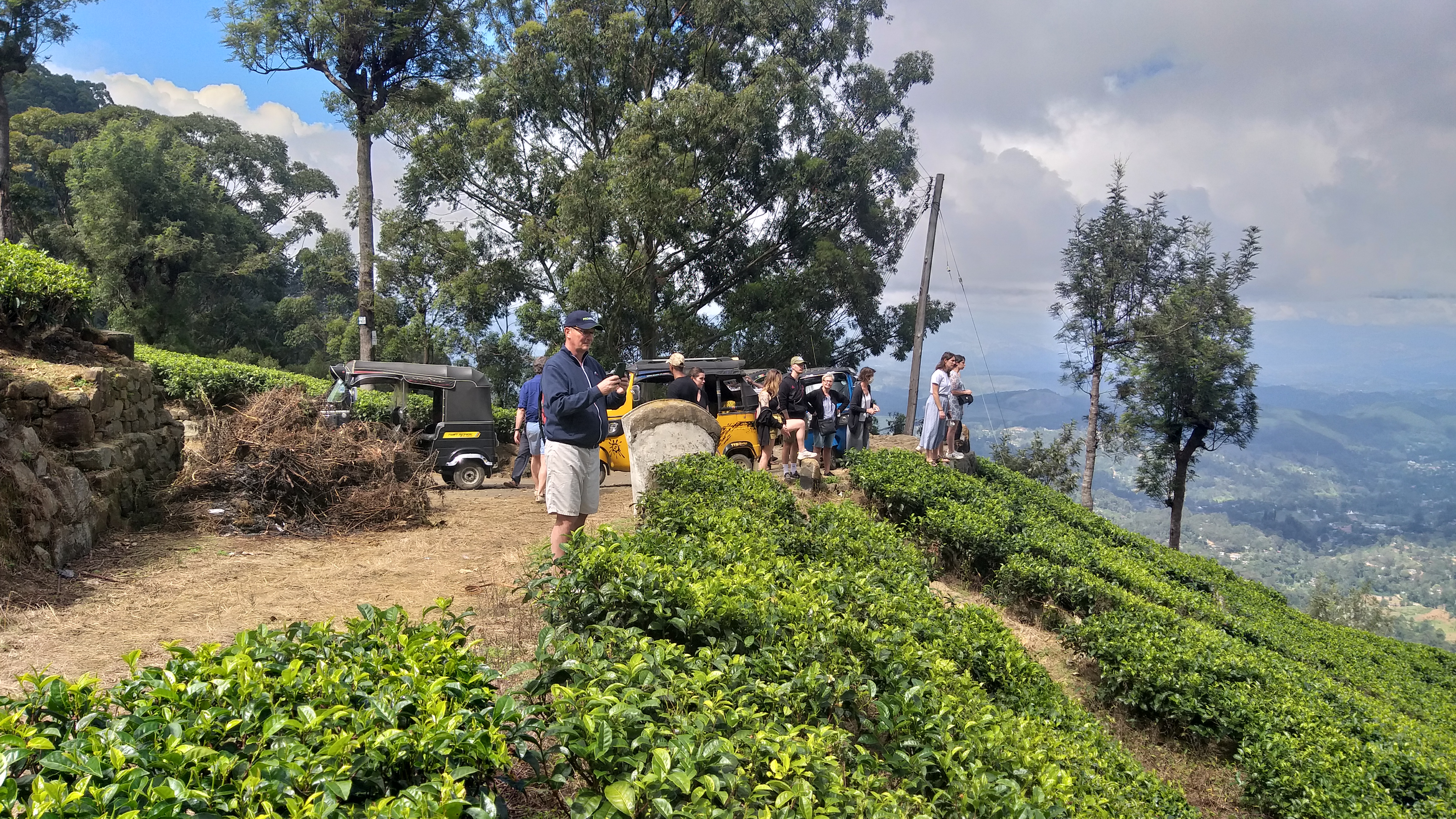 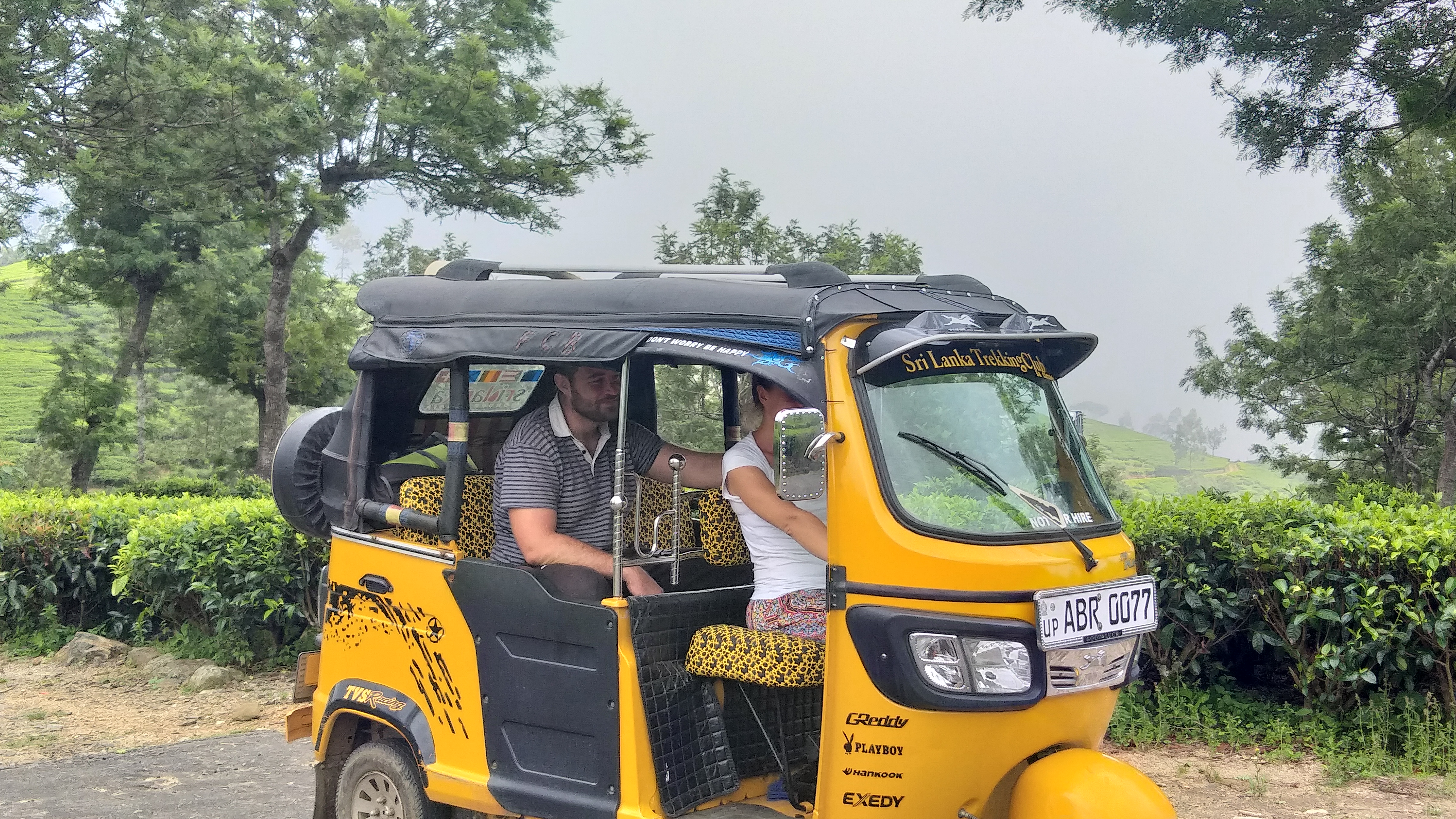 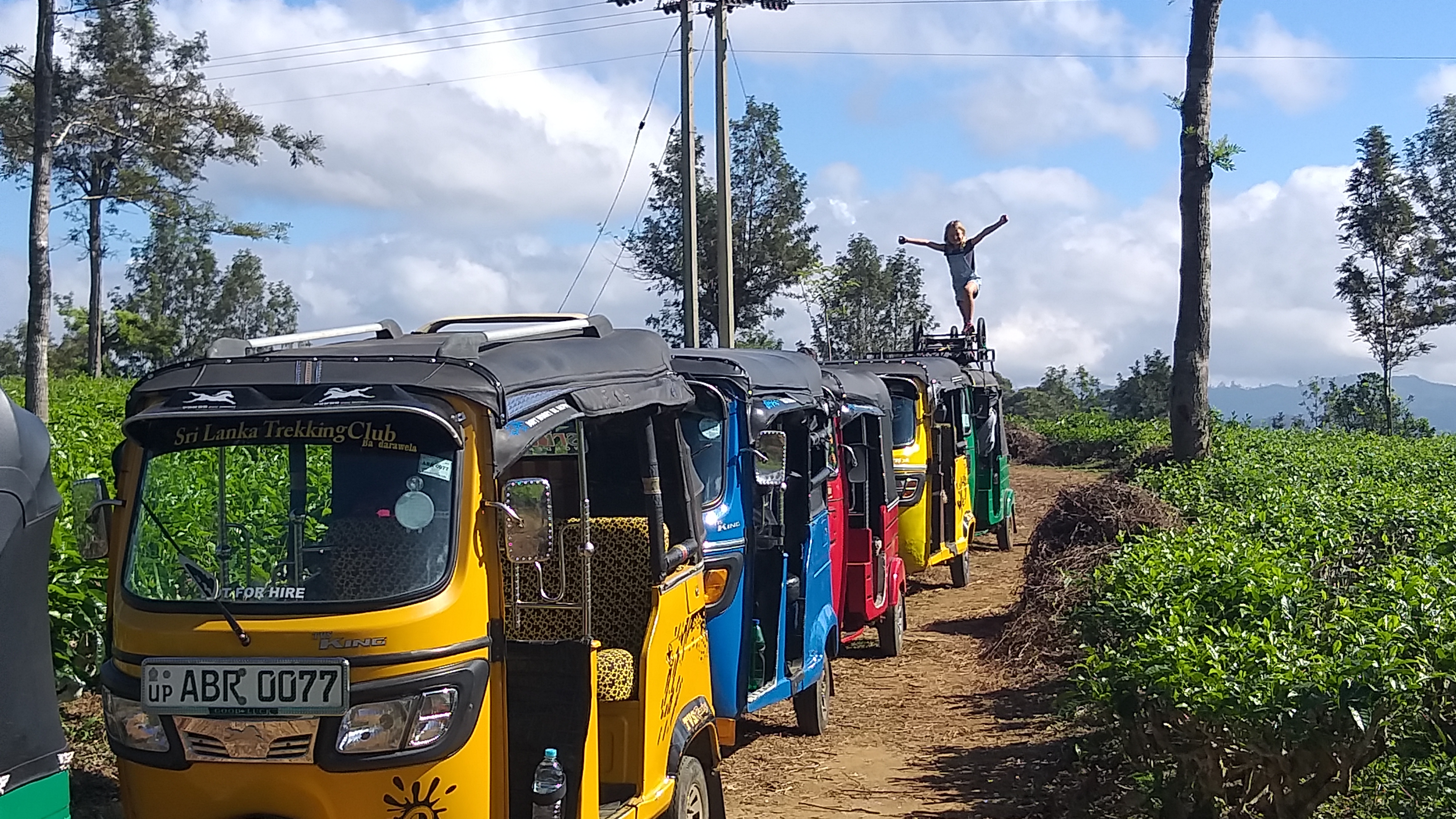 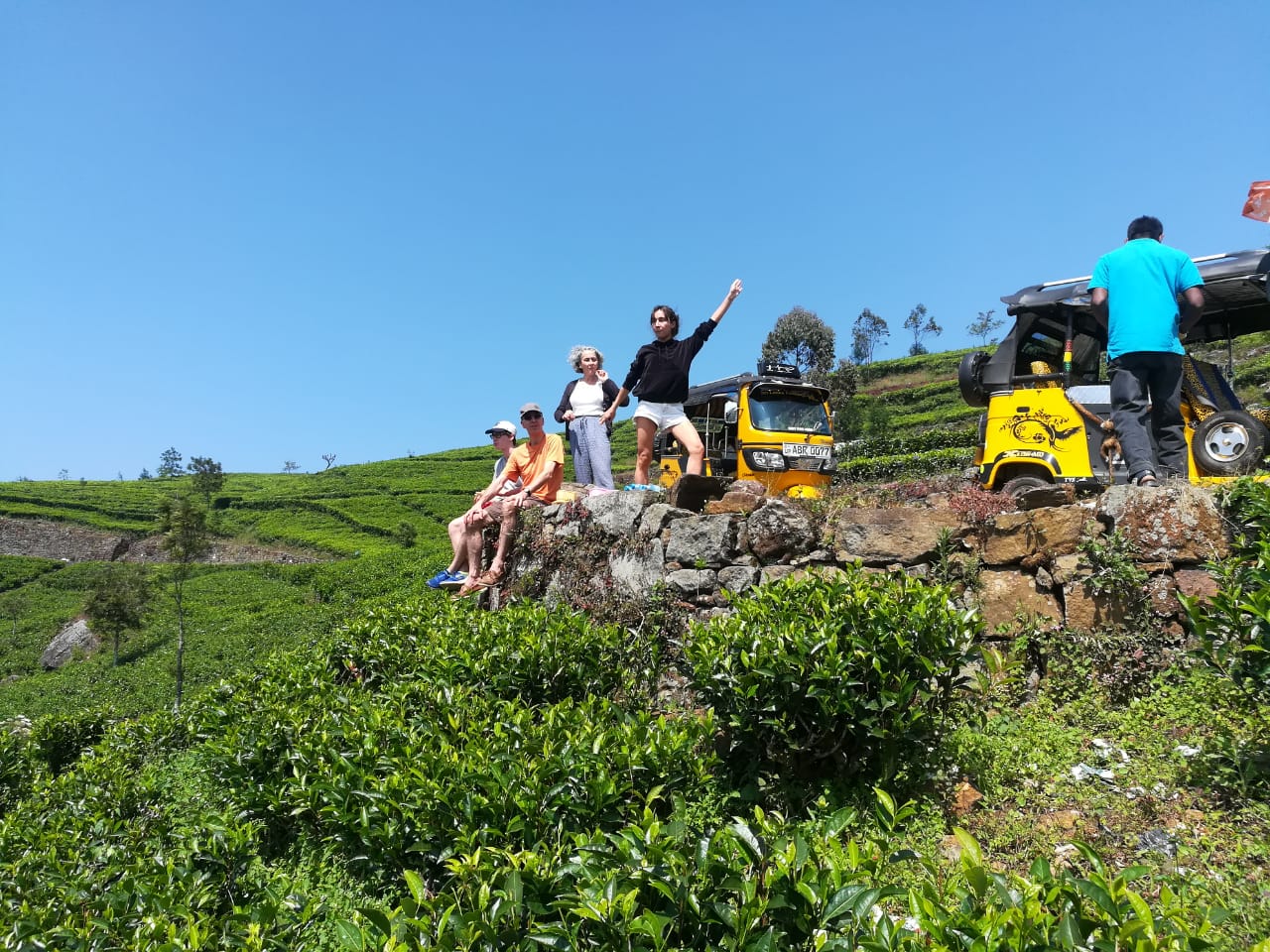 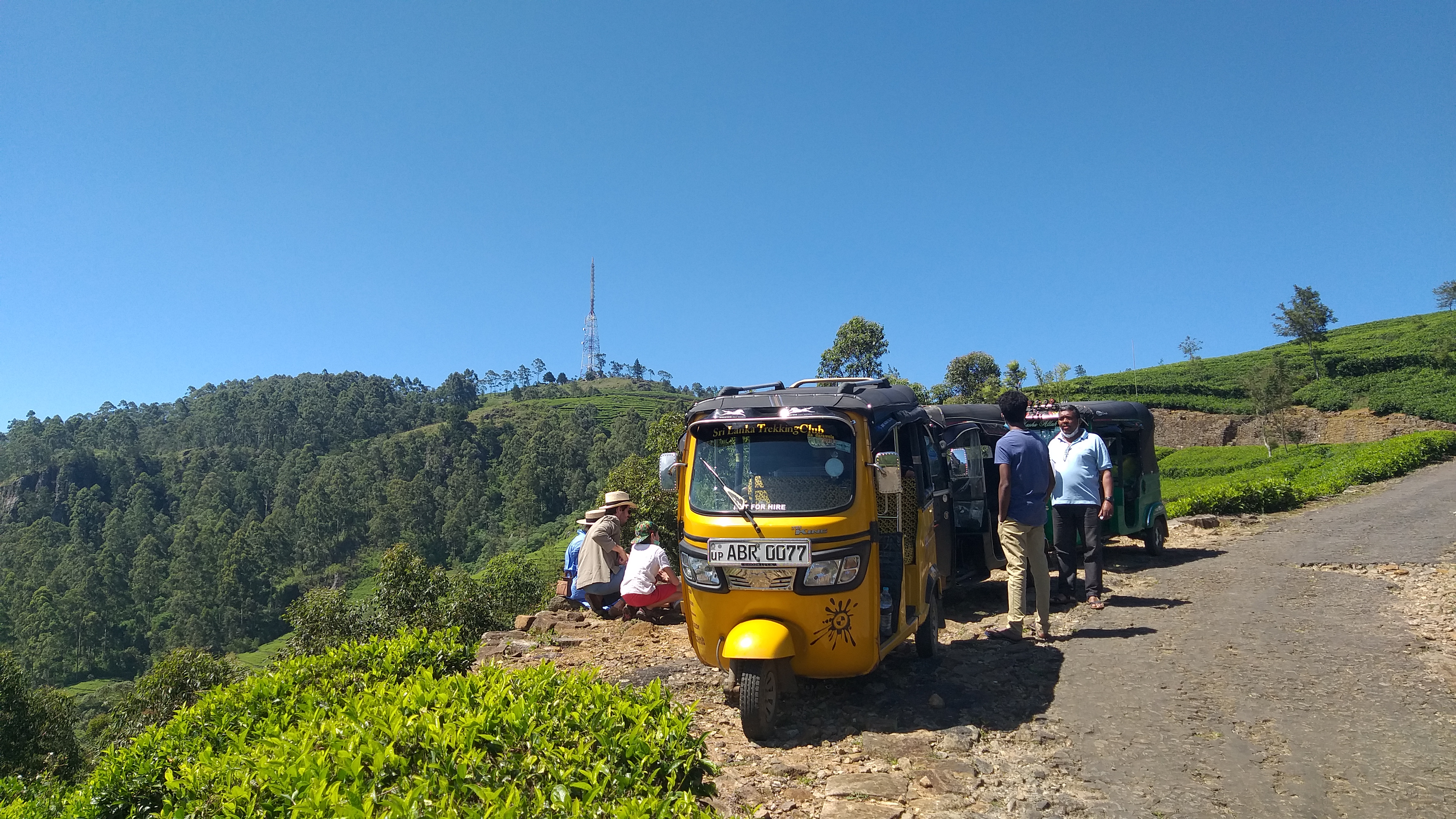 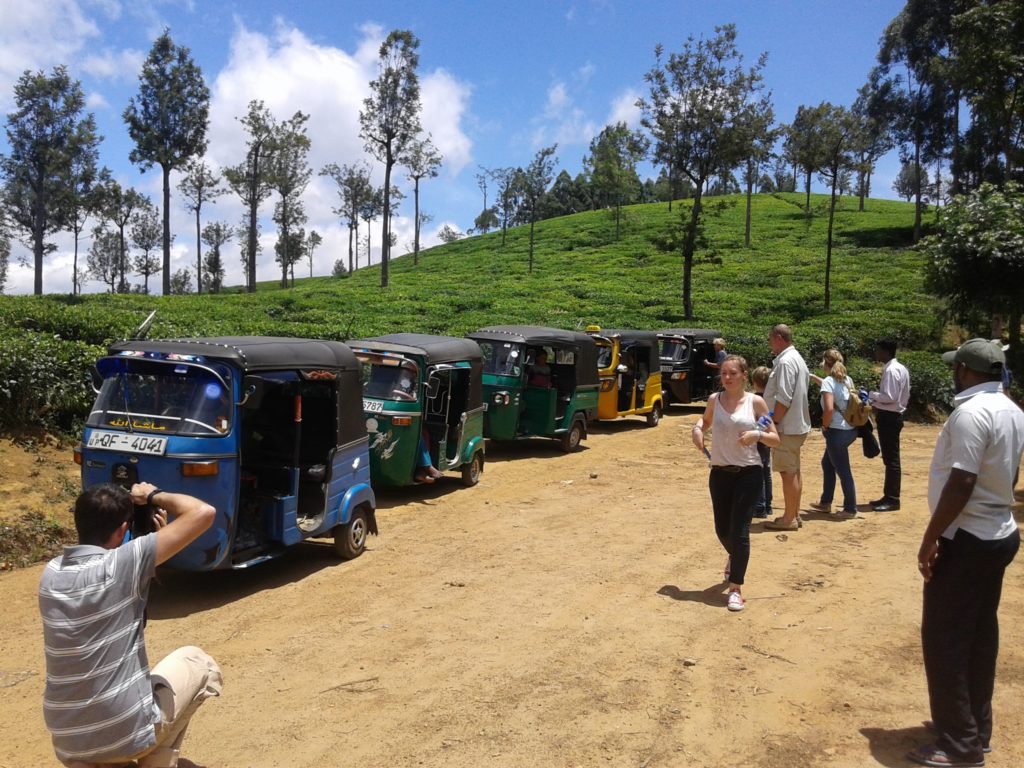 Ella is a beautiful small town in the south of Sri Lanka in the Hill country. It is a great base for tourists who want to explore the surrounding hills and enjoy the breathtaking views of Badulla’s green valleys the weather is usually quite humid, with moderate air temperature, sunny mornings.

Ella Rock is a famous cliff, located high above Ella’s village, roughly a two hours’ strenuous trek from the center of town to the top the rock offers stunning views across the hill country, and the plains below. The trek to Ella Rock is about 8 km long and and it’s a hard climb in the mountain.

We offer a tuk tuk safari to Ella rock so you will see the fantastic view from the Ella rock and same time you will have an unforgettable tuk tuk ride Trekking Sri Lanka is the organization start the tuk tuk safari first in Sri Lankla and our tuk tuk drivers are tourist friendly and safe drivers with experience of many years with tourist so we guarantee your safety with us The tour is about 3 Hours and we will offer a picnic on the Ella rock so you can enjoy a picnic in the forest with the best view Sri Lanka can offer. We start our tour from Bandarawela or Ella. 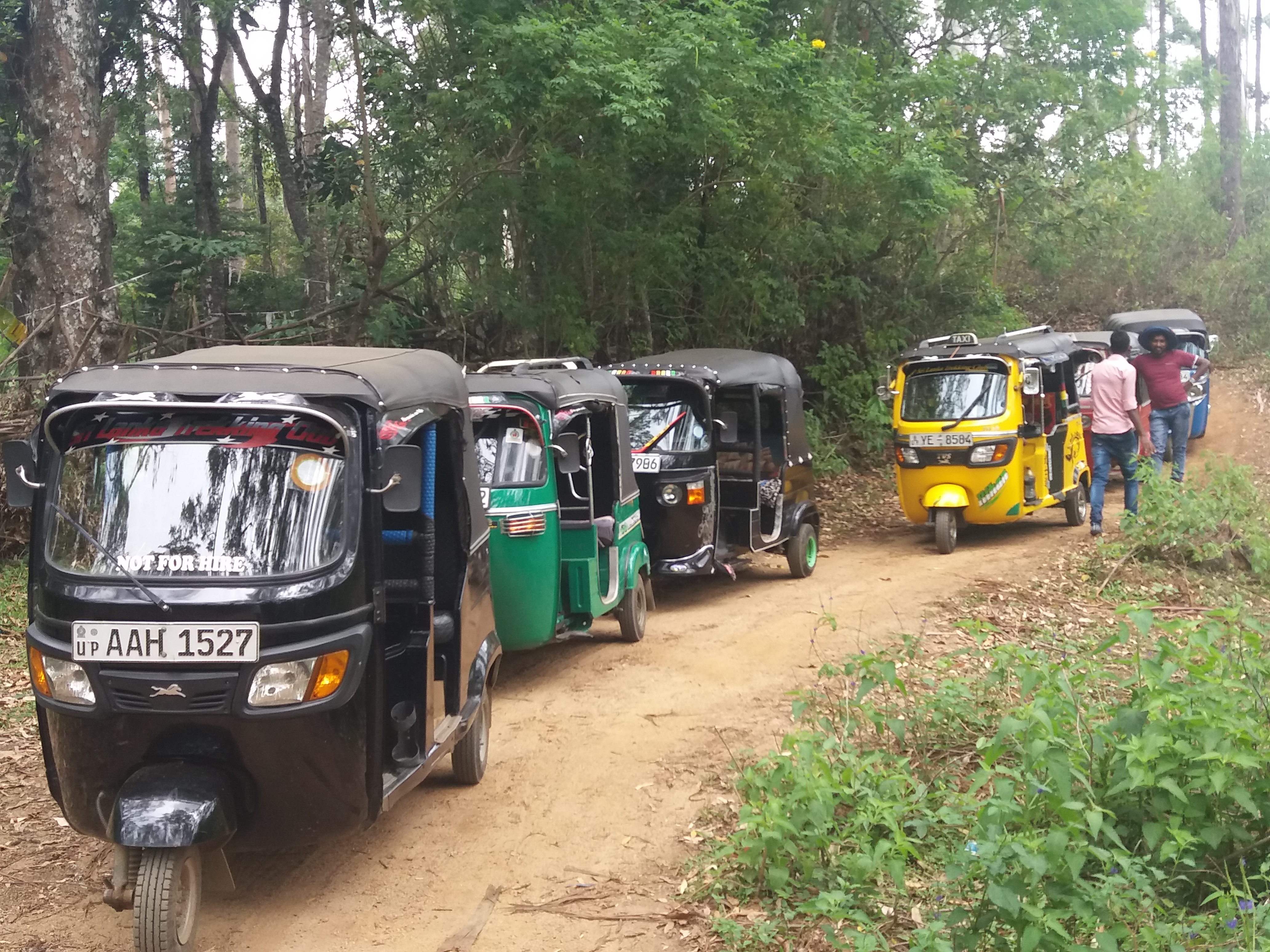 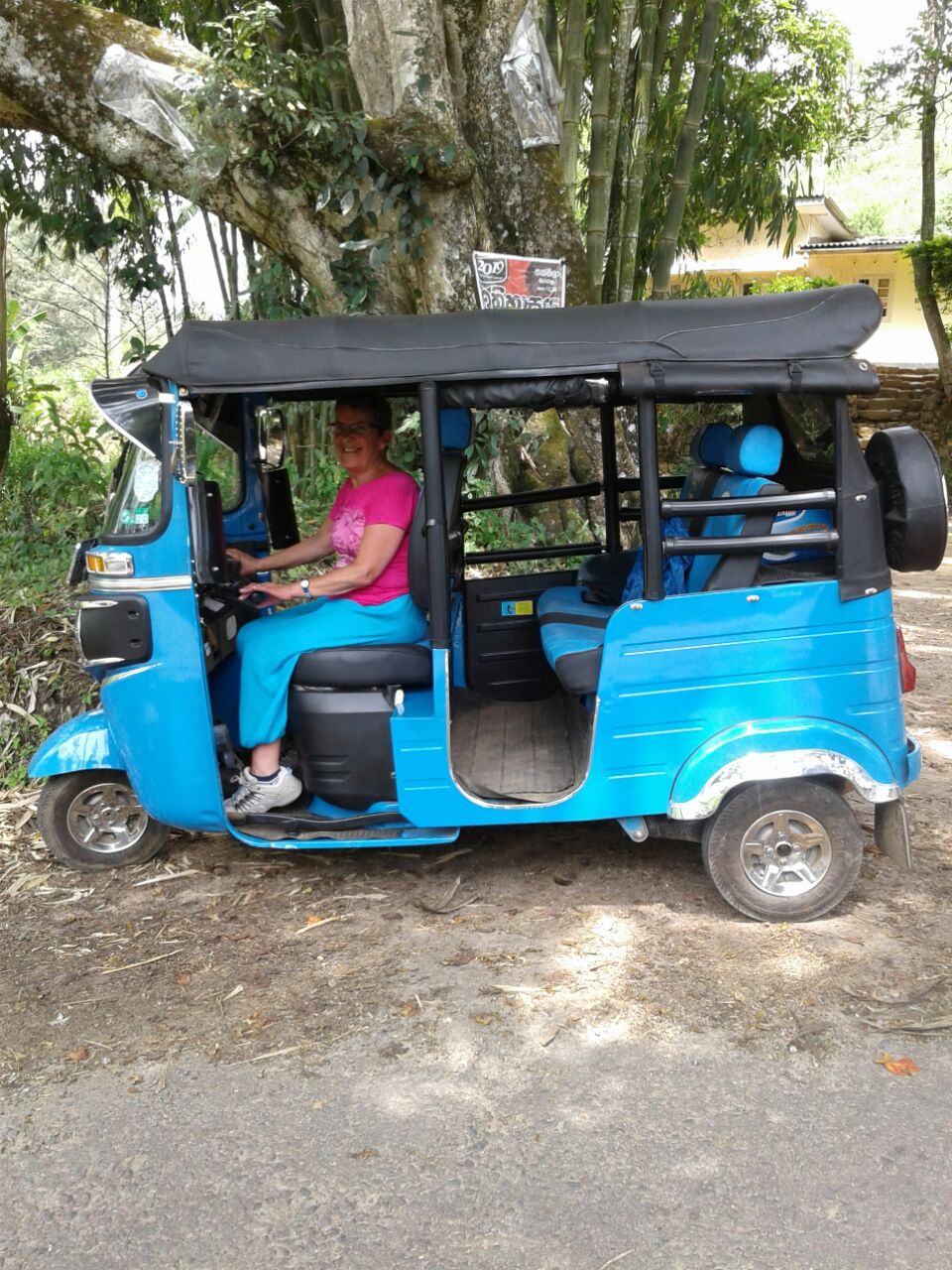